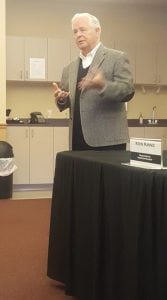 rt Arthur attended the Chambers June Public Policy meeting to learn more from Kevin Mannix, a local attorney and member of The Oregon Shipping Group, who is one of the proponents of the development.

Here are some facts:

1. The Oregon legislature approved $25 million in lottery economic development funds to the Oregon Dept. of Transportation (ODOT) to establish an intermodal facility in the Mid-Valley.

2. The intermodal facility will help Mid-Valley farmers and business owners save money in shipping costs using rail compared to trucking alternatives. As an example, local farmers are currently having their containers trucked to either Seattle/Tacoma, Oakland, or Long Beach, California. Having those containers delivered to those ports via rail is more cost effective, eases traffic congestion by getting semi-trucks off the road, and is better for the environment.

3. Five proposals were submitted for consideration and both Brooks and a project on the former International Paper site in Millersberg were selected as finalists each receiving grants of $625,000 each to finalize their final proposals. The Brooks facility could either be on one of two (2) sites owned by Norpac Foods, or on the Downer Site which is a large tract of land west of I-5 off River Road North. The Norpac sites could both be served by Union Pacific. The Downer Site would be served by Portland & Western Railroad which would tie into both Union Pacific and BNSF in Portland. The Millersburg site is serviced by Union Pacific as well. The Oregon Shipping Group is spearheading the Brooks proposal while local economic development officials, volunteer board members, local legislators and outside consultants are shepherding the Millersberg proposal.

4. The five (5) member Oregon Transportation Commission is expected to make the award in December, 2018. The winning location could see work begin as early as the Spring, 2019.

The impact locally will be a positive one. Not only will the intermodal facility employ approximately 20 people, we will see ancillary businesses such as truck repair shops surface to service the need this use will have. Congratulations to the Oregon Legislature for being forward thinking on this. With farmers and businesses of the Willamette Valley will be the benefactors no matter which location is selected.