As the Portland area’s industrial real estate market becomes more congested, developers are looking down Interstate 5 to Salem for relief. 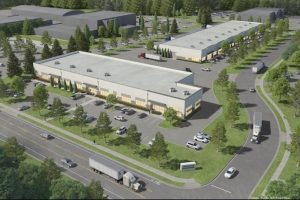 Beaverton-based Pacific NW Properties said this week it will construct a 70,000-square-foot business park with room for about a dozen tenants on the capital city’s south side. Pacific, which says it owns and manages some 100 buildings and more than 500 tenants across the Portland area, is preparing to break ground on the two-building South Salem Business Park. No tenants have agreed to occupy the space as of yet.

“We’re bullish on the market, but in some senses, taking a big leap of faith, simply because we’re not currently in Salem,” Evan Bernstein, a partner with Pacific NW Properties, said in an email.

The move comes after Portland developer PacTrust laid plans in 2017 for six industrial buildings at Salem’s Mill Creek Corporate Center totaling approximately 400,000 square feet, according to the Salem Statesman Journal. At least two of the buildings have been completed.

“Portland is no secret and more of the capital entering our market is out-of-town money looking to build large, big-box warehouses like we’ve seen primarily in the East Columbia Corridor,” Bernstein said. “With this landscape, Salem has less competition and a lower risk of oversupply of industrial space from too many developers delivering squares.”

Pacific is designing office and warehouse space ranging from 3,000 to 16,000 square feet to lease, Bernstein said. It will come with dock and grade loading. Pacific’s idea came together with the help of Curt Arthur, managing director at SVN Commercial Advisors in Salem.

“We have a lot of needs in the market, but one of our core needs is the product type that they like to build,” Arthur said. “If you take a look at the market overall right now, there really is almost no vacancy when it comes to spaces under 10,000 square feet that offer a user a dock and a grade-level door.” That’s not to say the business park would rebuff a larger tenant. Talks are underway with a national tenant that could take up between 20,000 and 30,000 square feet at the business park, Arthur said.